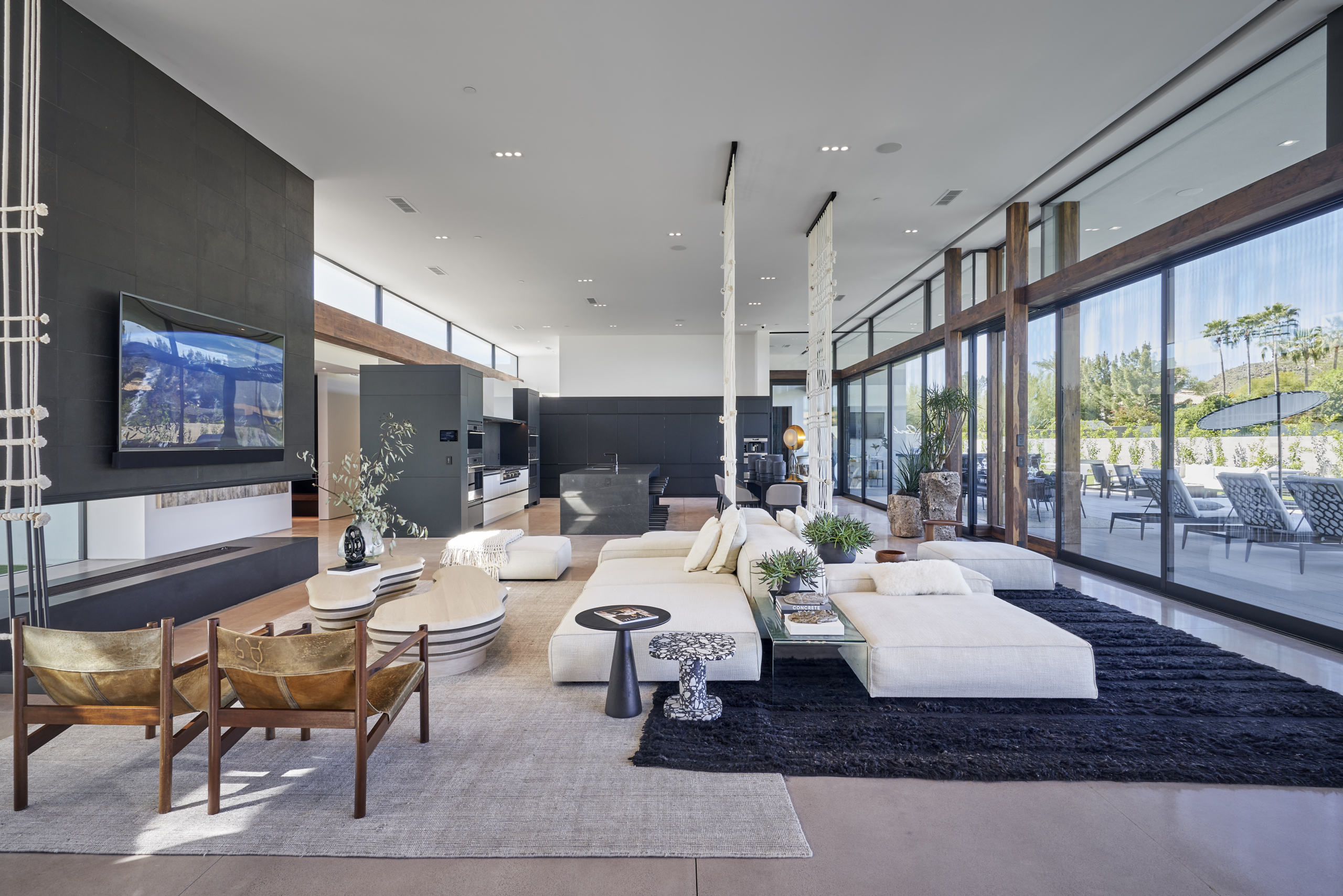 Nestled in 14 acres of real estate with breathtaking mountain views, the Cameldale Estates in Paradise Valley, Ariz., comprising 11 6,000-square-foot homes, each with a base price of $5.7 million, was visualized by Bedbrock Developers as delivering luxury buyers, in search of only the very best, the apex of design and connected technology, but kept totally in tune with the indoor/outdoor living style that beckons so many to this area of the country.

The plan for each unit incorporated four bedrooms, a kitchen, an in-ground pool, and other spaces earmarked for working, exercising and entertaining. Floor-to-ceiling windows are also ubiquitous throughout each, providing stunning vistas while inviting swaths of natural light inside which complement the generous outdoor entertainment spaces.

During construction, the project captured the imagination of luxury lifestyle publication ICONIC LIFE Magazine, which then helped conceptualize one of the estates as ICONIC HAUS, spearheading a collaboration involving 19 design teams to transform that dwelling into a designer show house.

To bring the concept to full fruition in terms of the technology, Bedbrock enlisted the assistance and partnership of Crestron, who had previously worked with them and with their technology integrator of choice, Scottsdale, Ariz.’s Creative Sound & Integration. Creative Sound’s president, Ed Moreau, is a longstanding Crestron Elite Pro installer. “They introduced me and Crestron to the developer, and then Bedbrock became a Crestron Design Build partner,” Michelle Guss, Crestron director of business development, told Connected Design. Moreau told us that he had a multi-year relationship with Bedbrock that made his integration team the logical choice to be called upon for this project.

Creative Sound & Integration made the recommendation to use the Crestron Home platform for ICONIC HAUS. “It includes their newest, latest, greatest graphical user interfaces, is scalable, and it was starting to get recognition within the industry,” Moreau said. What’s more, he added, was the fact that whatever was installed as a base system could easily be scaled up into a full-blown automation system well beyond the entry-level package. “Because of its performance and simplicity,” explained Guss, “it gives the client the ability to make changes to the scenes of the system without having an integrator come in to reprogram it. It’s scalable, and the base package of lighting control and audio can be easily expanded to add motorized shades, distributed video, integration with security and surveillance and pool control – all without adding additional infrastructure. And the app is extremely easy – with intuitive functionality that allows any client to walk in and understand how to use it.”

Touch screens, keypads and fixtures for the system are unobtrusive, and they work the automated shading as well as Crestron’s new Horizon Lighting line.

The property’s high ceilings feature unique lighting fixtures and shades, timed to let natural light in, filter out the hot rays of the sun, and provide privacy when desired, rising to reveal the pool and outdoor patio. Distributed audio and video are set up for adding music to a room with a single touch, and both live and streamed video content can be relayed among rooms from an app on a remote or a touch screen.

Collaboration at its Finest

The Creative Sound & Integration team used Crestron Horizon solutions to design tunable lighting scenes in the bathrooms to support circadian rhythms for sunrise, daytime, sunset and evening. And the team also followed the home buyer’s directives for the property’s “man cave” that also doubles as a guest house when needed. He can manage all the video on the 85-inch TV screens from a smartphone or tablet, but when a guest is using that space, a Crestron HR310 Remote only permits command of the TVs, Apple TV, lights and other sources in the room for privacy and security – but does not provide access to the rest of the home’s systems.

The success of a project of this scope, with so many moving parts and so many disciplines needing to collaborate with Swiss watch precision to pull it off, was a testament to the professionalism of all involved.

Michelle Guss weighs in: “The biggest hurdle was staying on schedule – always the case when you have a show house with multiple design teams doing their work at different times, and having to schedule that out, and making sure the tech is customized to the desired way in each room. I have to say, the creative team did an exceptional job of finishing early. Typically in our industry [integrators] are the last ones on a project, but they just did everything to stay on top of things so there were no delays and the house was done on time.” The Creative Sound team, for its part, was very pro-active and got most of its work done before the 19 designers added their touches, said Moreau, and just a few minor adjustment needs surfaced, and were handled by Creative Sound adroitly, involving changing wall plates’ coloring and handling a window treatment swap-out.

The flexibility of Moreau and his integration team factored heavily into the project’s success – and their performance served as a template for the other units in the development for when those were sold, since this unit’s buyer wanted the fullest set of control and automation options. With these units, theoretically, he explained, “people could move in and say, ‘I’m fine with basically four rooms of streaming music, lighting and thermostat control,’ which was the extent of the base package, and they wouldn’t need us for more – or we could take it to the full level – as this buyer did – which included full shading, expanded lighting systems, and integrated, centralized video distribution with all the televisions, touch screens, and everything else you can do with Crestron.”

Every home in the development, moreover, will be ready for adding more technology to the base system. “Buyers can customize with upgrades they wanted, using pre-wiring already in place,” says Guss.

Guss went on to praise the amount of close collaboration in the project. Much of the planning for it was worked out before the pandemic period. “It was pre-COVID-19, when people could gather in person. We were able to meet with the design partners and it was great, open communication. Each designed their own space but made sure that everything blended seamlessly throughout.”

Moreau also noted the high level of interdisciplinary cooperation. “We were all really responsive to taking each other’s calls and answering questions on the spot… Even adding a lighting fixture here and there that wasn’t planned, we were able to coordinate with the electricians to expedite making changes like that without too much red tape.” Moreau said how smoothly conversations went with the homeowner, who was handling his part remotely from another continent – and when all was said and done, the buyer even permitted the home to be shown to potential buyers for the other available units. “This [showcased] some nice Crestron system designs, because people were seeing them firsthand in this home. That was a benefit for us – that the buyer really decked it out with things we like to be able to show off.”

Guss added that the project was also collaborative “in terms of sharing the home from a social media perspective. Everyone was involved in and included, on posts about this beautiful home.” With social-distancing regulations eventually restricting in-person tours, the home was then “taken digital,” via a digital tour experience. “It opened the door for this home to be viewed by people in other areas who may not have been able to get there geographically,” she said, “and allowed us to reach other parts of the country and the world we wouldn’t have. There were 50,000 ‘guests’ who went through the virtual ICONIC HAUS tour experience!” The tours also doubled as fundraisers that benefited The Heart Center and Phoenix Children’s Hospital.

“There’s lots of technology on this project touching every area of Crestron residential products,” reflected Guss. “But the phenomenal thing about it is, walking through the home and experiencing it reveals how the technology is a complement, and how it blends with the home design, allowing the designers’ vision come to life. There’s so much technology happening behind the scenes, but that design in the forefront really shines through.”

Guss crystallizes the overarching achievement in the ICONIC HAUS: “It’s a beautiful thing when technology can blend seamlessly with design – that’s when it’s a true success for all of the teams involve, and of course for the homeowners.” 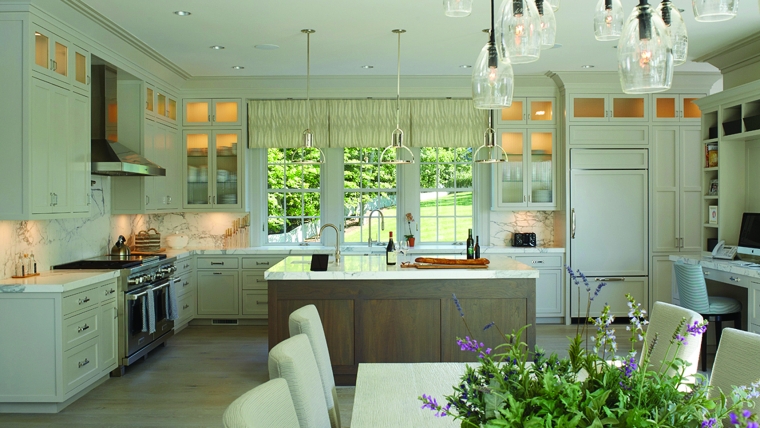 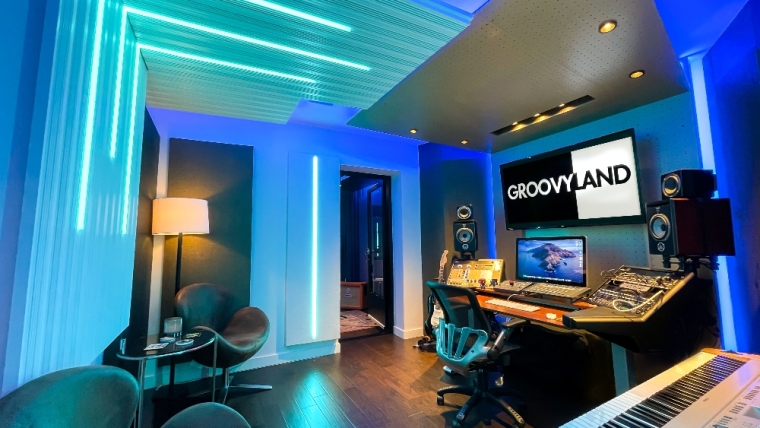 The New Room Your Clients Are Asking For 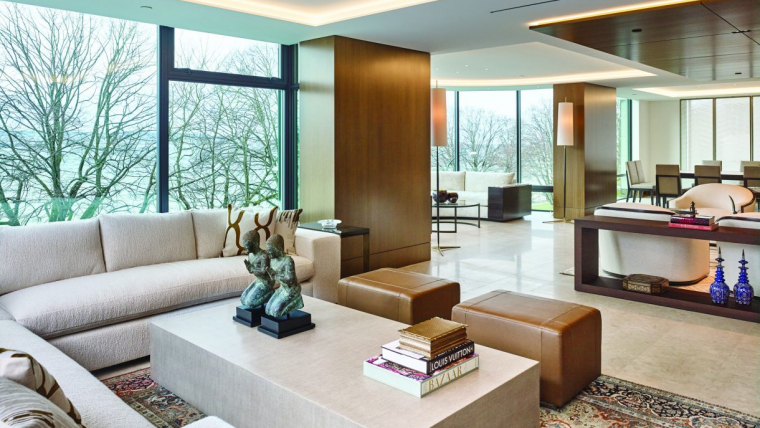