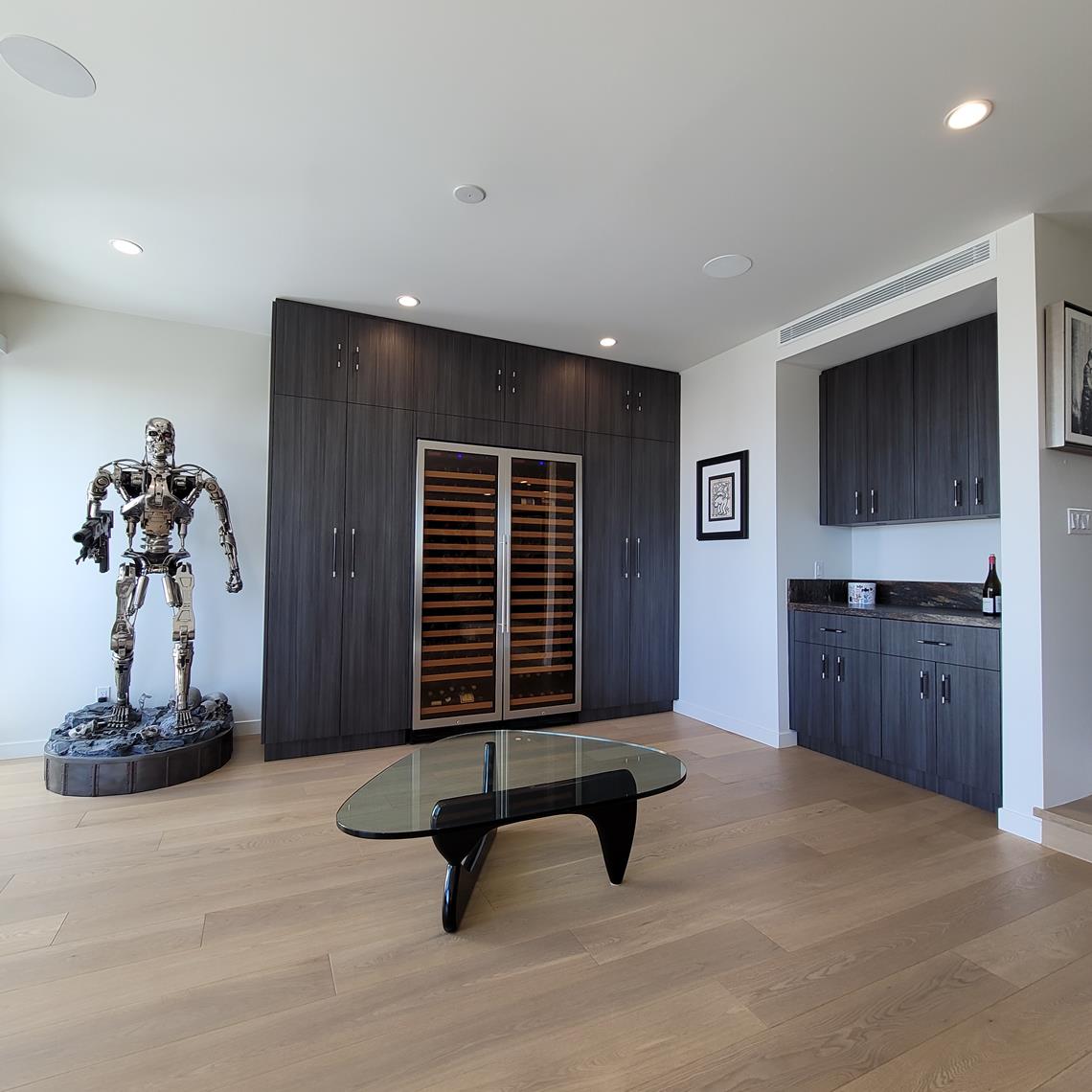 Integrator Jay Dobensky has often been accused of pushing the boundaries when it comes to systems design and hardware capability, but that never seems to dissuade him from taking on tasks considered extremely difficult, if not impossible. When a pair of openminded clients came to him with their ocean view dream home in Santa Monica, Calif., he worked with URC Automation to create both a technical and visual work of art above and beyond the expectations of the client.

“I wanted this project to ‘show off’ to this particular client what it means now in 2021 to have a fully integrated home,” said Dobensky, who is the founder of Beverly Hills Smart Homes. “They were the perfect client in the sense that they essentially gave me carte blanche to create the ultimate automated and integrated home environment.”

These clients had extensive familiarity with the URC family of products from their previous home on the East Coast and were fully on board with going to the next level for their new home. Relative to the design of their condo, they wanted a clean aesthetic that allowed them to showcase their extensive artwork collection, while making every system — lighting, audio, HVAC and more — extremely functional and sustainable.

This started with URC Automation’s Total Control line of custom hardware and the newest version of their software platform, along with its corresponding operating system known as Accelerator3, which was released roughly during the middle of the project. Dobensky had completed most of the programming with the previous version, Accelerator2, but he was able to go back in and give the clients the latest and greatest version of the platform. These upgrades included a pair of URC’s new TRC-1480 remotes with built-in Alexa voice control, a substantial upgrade over the initially proposed TRC-1080 remotes — at no extra cost to the client. The inclusion of voice control was one of the most surprising expansions to the initial project scope.

“At the beginning of the project, the client just wanted the option of voice control,” said Dobensky, adding that voice control is a big focus for URC Automation this year. “By the time we finished, the entire house was controlled with Alexa voice commands through URC.”

Overcoming the Challenges of a Modern Design

It was important to Dobensky that the technology in the space did not impede on the overall clean and modern design. However, at more than one point in the project he had to overcome a few challenges to install the functionality the clients wanted.

“The general contractor, Blanco Construction, had to do a lot of structural steel installations in order to carry the significantly altered load distribution, as they blew out most of the original walls in favor of a mostly open concept floorplan. This involved literally tons of steel beams and floor joist supports across the second floor, which can wreak havoc with anything wireless,” he explained, and while this did indeed open up the layout, it also made cabling more complex because it limited places where he could run wire.

The necessity to ensure optimal wireless signal coverage was managed with the use of four Luxul Wi-Fi Access Points, meshed together with the Luxul AP Controller and tied into the 300Mbps network backbone with a Luxul Managed Switch and Router.

“We also discovered that once the steel beams were installed there was a significant degradation in cell phone service within the home,” Dobensky explained. To counter this, he installed a Wilson Pro 70 cell phone booster, which gave the clients full service in the space regardless of cell carrier.

The multi-zone HVAC system in the home also turned out to be a big challenge. There was some pushback from the initial HVAC contractor about Dobensky’s plan however, which included installing the Lutron LR-HVAC controllers with matching flush-mount wall sensors in place of the wall thermostats. Dobensky proved to the clients as well as the general contractor and HVAC contractor that his plan for controlling the four different zones of the condo would work, and he ultimately won the approval of everyone involved.

With URC’s support and staff, Dobensky was able to incorporate the controls for these typically commercial-grade controllers on the HVAC with Total Control and Accelerator — which is not something they work with every day.

“I will admit that it did take a while to bring this unique brainstorm to life, and the URC Systems Support Team had to be patient with me,” said the integrator. “However once I told them what the hardware was and what my theoretical goals were, they were fully engaged as always to create the best solution along with me, while enjoying the process of building something unique that didn’t previously exist.”

A Standout Project with URC Automation

This art-loving couple also had an affinity for the quirky and fun, including a life-sized T800 “Terminator” prop from the 1980s film. The clients had a local stage repair man fix a wire connection issue that occurred while moving the prop across the country, and URC was able to link with it through voice control and one of the twenty URC Smart Outlets in the home. Now the homeowner can simply “command” it to turn on, and the eyes and the laser rifle LED’s light up red.

“If you’re in that room, you simply have to look at it,” said Dobensky. “It’s pretty much the bomb.”

Dobensky has been working with URC for more than 20 years, even before he started his own company. When he aligned himself with them back then, he had a gut feeling that they were going to continue evolving and growing, and he feels this home encapsulates that.

“Hopefully this award-winning project is a springboard to showcase what’s possible in the smart home of today and encourage my fellow custom integrators to enjoy the ride and where it takes us over the next few years,” said the integrator. 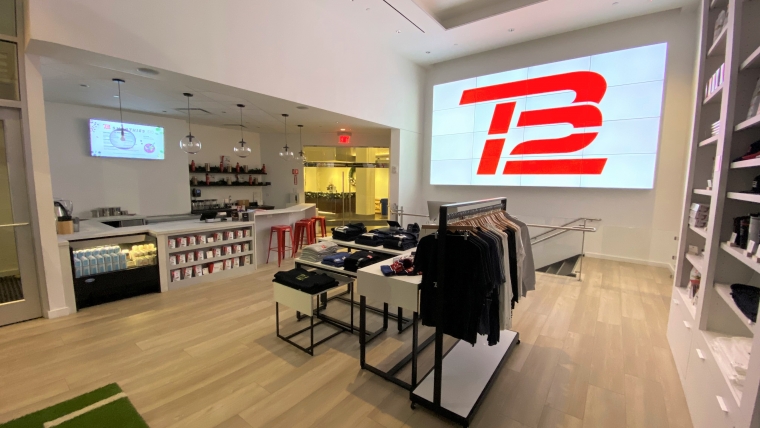 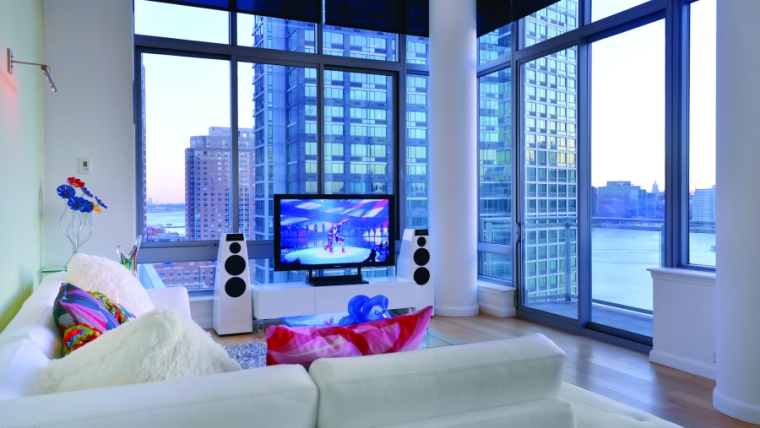 A Speaker View to Rival the Manhattan Skyline 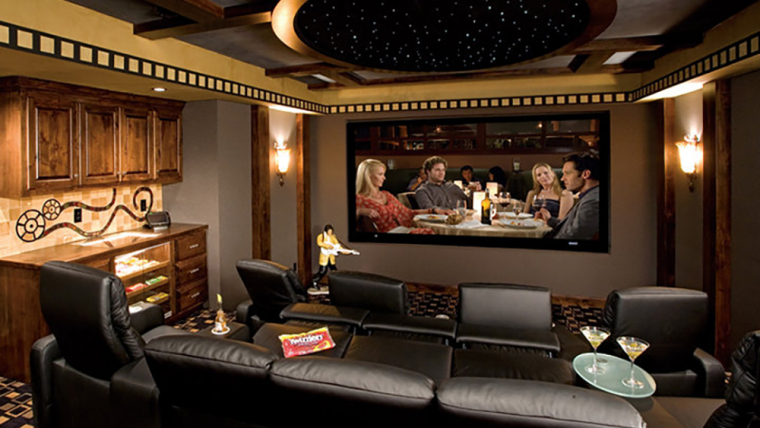