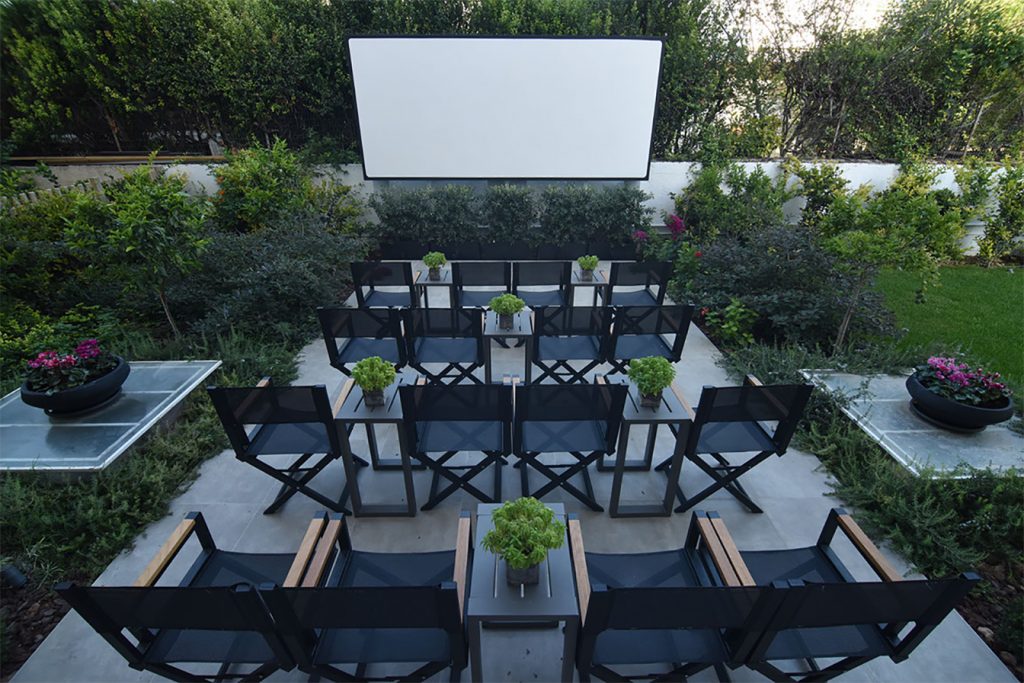 Like most aspirations, Theo Kalomirakis can trace his dream of creating home theaters back to a young age — to a time when he ran freely through apartment complexes in his Greek neighborhood, galavanting from one open-air theater to the next. They were all the same, he remembers: directors’ seats situated atop the gravel, large jasmine vines climbing the walls – and, of course, the movie screen.

“I would dream that one day, I would be able to rent an apartment in front of an open-air theater so I could watch movies for free!”

He even went so far as to create a “makeshift theater” of his own as a child, decorating with plants to create the rustic ambiance. “It was a big hit!”
Some may call him a movie buff; he is fan of independent movies and old American classics, but it goes far beyond a mere love of film. As most in this industry are aware, it is a passion for creating an authentic cinema experience at home that is his calling and his trademark.

When the pandemic hit last year, Kalomirakis was busy with his latest venture, Rayva, a business he co-founded, which provides integrators with home theater template designs that can be installed in a few days, as opposed to a few years. While he intended to depart for Greece in the fall of 2020, he decided that with the state of the health crisis, it would be best to leave a bit early, arriving there in July 2020, where he settled into a home he purchased in 2018 and was renovating.

For Kalomirakis, this has been a time of reflection, of reconnecting with his roots and coming to peace with the current state of his career.

A Dream Fulfilled
Kalomirakis “fell in love” with the property, particularly the garden, and quite quickly “went crazy” designing the open-air theater of his dreams.
“Everything that I had seen in the homes of the clients I worked with, I wanted,” he exclaimed. ‘Everything’ isn’t always in the budget, so he reached out to friends in the industry to find what he needed in his target price range. “I stopped at nothing to make the theater the most technologically advanced.”

The home provided Kalomirakis with an opportunity to view the installation process from both the homeowner’s and the integrator’s vantage points. “You do your best to finish a project to a client’s liking, but you don’t always know, when you leave, what their hobbies are; and you never know if you completed a job that is 100 percent what they need,” Kalomirakis explained. “With my theater, I discovered what I could do for the clients and what I may have missed to offer.”

With two levels to work with and between 4,000 and 5,000 square feet of garden space, Kalomirakis used the lower portion of the dual-level property for the open-air theater. In an almost hidden space of the landscape, the theater sits engulfed by jasmine and magnolia flowers that “break your nose” with their fragrance. A tile floor was installed as opposed to traditional gravel, and “indestructible” Italian seating was acquired from a designer with ties to Ralph Lauren.

The design is brought to life with a robust Klipsch sound system, a 4K Epson projector and lighting adorning each planting. A permanent metal structure was engineered for the screen, clad with weather-resistant drywall, which was painted with Screen Goo. The lights are automated to dim at the start of the film, which happened to be “Darling,” starring Julie Christie, the movie selected for the debut of the theater.

“That night, there was a full moon,” Kalomirakis recalled. “To see the large screen with the Greek moon over it, it was an incredible experience.”

Creating the Magic
While the outdoor theater embodies all of Kalomirakis’ childhood memories, his indoor theater is the culmination of his years of designing spaces for his clients, including the lessons he’s learned and mistakes he’s made along the way.

“When I go to my home theater, I want to feel like I left the house and went to see a movie,” Kalomirakis explained. “I want to disconnect from daily life. I don’t want it to seem like an extension of my daily chores. It should be a special excursion. When you go to the movies, you dress up, you leave the house and you enter a new space. All of the things that have been visual signatures of my theaters all along were incorporated into this home theater.”

However grand they were, Kalomirakis remembers realizing that each theater was a “hodge podge” of style motifs, from Chinese to Arabian, etc. “But there was something magical that held it all together — the passion of the architects to bring to the people the grandeur of European masters. They were still inspiring, even in their naïveté. They had an ability to create wonders for the regular people so that for an evening they could feel as though they were visiting a royal court.”

Kalomirakis wanted to apply what he respected from this age of architecture, without repeating these design mishaps. It has become his own signature, the ability to take simple spaces and make them appear richer and bigger.

“To take something so big and bring it down to fit a room without making it look like a dollhouse [has been my work]. Over the years I learned to manipulate scale so although the theater is tiny, the impression is that you are in a big theater. Because you fill it with details, you can break a monolithic room into smaller design components that create an illusion that the space is greater than it is.”

Integrators must take care when designing a theater that is not a great departure from the design of the remainder of the home.

“The key is to find out the makeup of the house and create something that is more developed and more detailed like a home theater should be, but not so much that it feels like a foreign object.
It took me years before I could say no to the clients [when they asked for designs that would not fit their home’s decor, but] I want them to have something to enjoy.

“This taught me a lesson,” he continued. “Good or bad, try to make the theater belong in a house but give it its own personality. Don’t try to show off by singing a different note.”

Over the years, Kalomirakis has become more of a minimalist – a “bold turn” from his days admiring the grandiose styles of the 1920s. In his interior theater, his attention was laser focused on elements such as the LED lighting, which encapsulates the theater from ceiling to floor. These lights change color on rotation with 350 different color combinations, which can move and flow or remain steady.

Another crucial element to Kalomirakis’ indoor theater was the curtain. While he admits that most people shy away from using curtains, he could not be more adamant that the curtain evokes a critical, magical element to a theater. “The curtain hides you from what is going to happen when the movie begins,” he noted. “That ceremonial opening of the curtain is what makes people applaud [before the movie even begins]!

Kalomirakis envisioned a wall-to-wall screen, which impeded the ability of the curtain to retract. Not giving up on his curtain, he recollected the Radio City Music Hall’s curtain and the dramatic way it rises on pullies and then disappears into the ceiling. While he was never able to implement this vision in any U.S. theaters, he can now experience it at home. “When the curtain goes up, you get goosebumps. It has a slow opening that creates a sense of anticipation.”

The design and lighting elements are fortified by CAT Elite loudspeakers and subwoofers and Klipsch in-ceiling speakers; a Barco Bragi CinemaScope 3D projector; and a Vutec curved screen.

Additionally, Crestron controls everything in the home from AV functions in the two theaters and the sound system in the garden to the jacuzzi area, house security, HVAC and the motorized blinds upstairs and downstairs.

Integration of Tech & Teamwork
One of his greatest pieces of advice for integrators is to build a trusted a team of people you can rely upon to create the theaters of customers’ dreams. Don’t think about starting a project until you have in place the audio and acoustic designers, the A/V control systems integrator, etc. “Everything I have learned is because of mistakes I’ve made. I am not embarrassed by it. You learn by doing.

“The most important thing I learned is that home theater is not about design alone, but it is [also] about technology — the integration of technology and design. [Integrators and designers have gone back and forth with where to put speakers and decor based on each other’s work.] I’ve learned that you cannot let your aesthetics take precedence or lead technology. Learning how to integrate technology into design is the No. 1 goal.”

Kalomirakis is proud to have worked with friend and colleague Yannis Roumpessis of Roumpessis Yachts and Home for the A/V engineering and installation, as well as Crestron for the home’s automation. Additionally, he worked with Steve Haas, president and principal consultant of SH Acoustics, on room isolation and room acoustics, and used acoustic treatments by Artnovion to ensure accurate reproduction of a movie’s soundtrack.

Ultimately, you need to “play with the ammunition you have,” which is lighting, design and your curtain. This will create a sense of anticipation that people enjoy when they go to the movies. And there is no better time than now to get folks excited to view movies at home.”

Integrated Technology on a Luxury Yacht 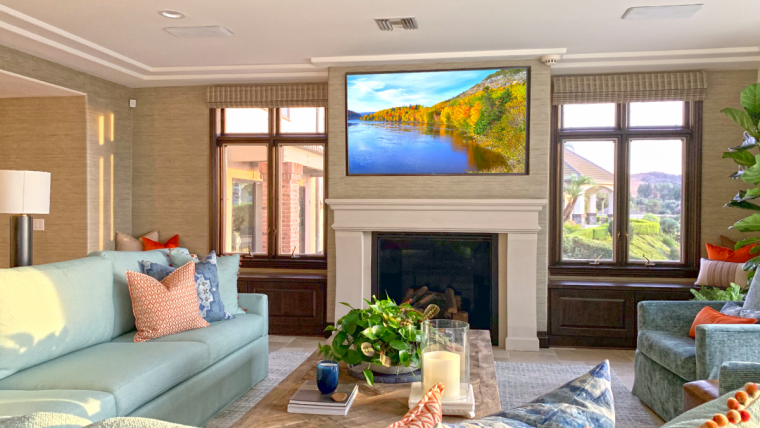 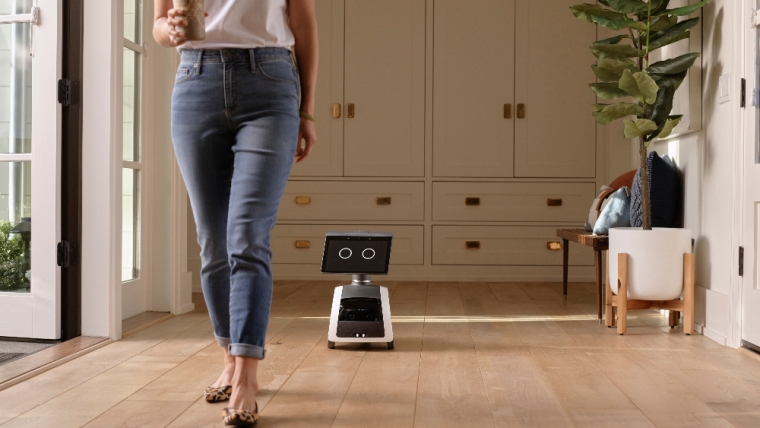 Joe Knows: Technology that Will MATTER for 2022